Quite a few irons in the fire...

Found some good deals on a couple of synths.
I'm a complete sucker for the Juno-106. This is the fourth one I've owned as I have flipped the others. It is complete and everything is stock, so the voice chips and coin battery will need attention asap. I haven't decided whether to restore the chips or replace them with the Analog Renaissance replacements. 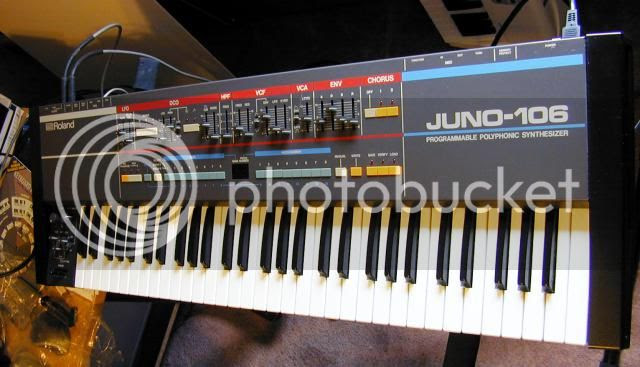 And an Akai AX-80 (not pictured). Just finished some work on it restoring function to some of the membrane buttons. It's common to this model because some internal board connections are rigid and often vibrate loose. For those interested I opted to remove the rigid connectors and solder individual wires in place. It worked very well. Later I will be programming some sounds and host a demo in the near future.
Also downloaded the G-Force M-Tron plugin and it sounds absolutely phenomenal.

MUSIC, not forgetting to make music. Started recording a track called Spin Down. It's a bit down-tempo and subtle finish to the yet untitled album. I've been in continual practice on guitar textures which will highly featured. It's not especially difficult, but during recording it seems every sneaky note or missed rhythm is well amplified. And it will mean the five year album endeavor will be completed. Now if I could only figure out what the album title should be.

I will be using this post to manage my download links.  As files are added or updated it will all happen right here. To open the zip archiv...